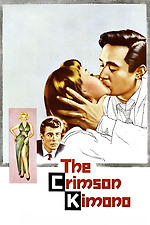 It doesn’t take much to realize that The Crimson Kimono, which features a quiet, tentative romance between a white American and a Nisei, or a second-generation Japanese American, was progressive for its time. Many would likely be surprised to know, however, that, in 1959, the year the film was released, nearly two dozen states in the U.S. still enforced anti-miscegenation laws, about half of which included "Asians" among the races whites were banned from marrying. And, according to a 1958 Gallup poll, 94 percent of white Americans disapproved of interracial marriage.

So yes, writer-producer-director Sam Fuller indeed wanted to push boundaries, which wasn't uncommon for him. The studio, typically, was more concerned about the bottom line, and tried to exploit the subject with lurid poster taglines such as, "YES, this is a beautiful American girl in the arms of a Japanese boy!," and, "What was his strange appeal for American girls?"

Fuller, not surprisingly, doesn't take the easy way out. He not only does not offer his Japanese-American character—a cop, well played by debutant James Shigeta—any overt racial prejudice to overcome, he makes him a conduit for the notion of "reverse racism," to borrow Fuller's words, with the underlying implication being that this is his response to the more implicit forms of discrimination he's often experienced. Moreover, despite pressure from the studio, Fuller refuses to demean whatsoever the character of the white cop friend who ends up falling for the same woman. He simply wanted her to pick the man she loved more, without any excuses.

Although relatively subdued for a Fuller movie, The Crimson Kimono starts off with the kind of pulpy, visceral edge he was known for, as we witness, after a spatially awkward cut, a burlesque queen running half-naked down a live downtown Los Angeles street. Only Fuller could get away with something like that. This was, after all, a man who went on to stage a shootout in a maternity ward nearly two decades prior to John Woo in Hard Boiled (1992).

The murder mystery here slowly ends up becoming subordinate to the romantic triangle, which works in the film's favor. Fuller is surprisingly delicate, even poetic, in his treatment of the characters and their relationships with one another. Early on, there's a nearly four-minute long take that helps establish the deep bond between the two cop friends. Fuller would later channel his inner Antonioni in depicting the alienation experienced by the Nisei.

The Crimson Kimono may not be a great film, but it is undoubtedly an extremely important one. The fact that it was ahead of its time when it was made is laudatory. That it still feels progressive, nearly six decades later, is embarrassing.