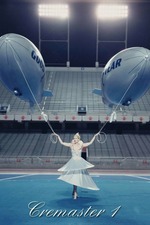 I have had The Cremaster Cycle in my possession for quite some time now but never made time to watch it until I was in the mood for the avante-garde, which has surprisingly been awhile. The entire series has been met with mixed reviews and like most abstract experimental films, it has been considered either a work of art or pretentious garbage.

So what makes a film, or experimental work pretentious? I think I know what the answer is, but I ask that question because perhaps my biggest pet peeve amongst the film community is that the word is so frequently dropped that it's practically a cop-out to most. There are plenty of pretentious films out there. I do not deny that, but what bugs me and gets under my skin is when there is a certain film that appeals to a specific audience, that is deliberately difficult to access for the masses and because of so is labelled pretentious. It bugs me when people who's opinions I respect can be so dismissive just because a film they watch is too particular in its art, or too abstract and minimalist that it alienates them. Why must a film be labeled pretentious just because you have such a difficult time with it?

That is actually the key word here: alienation. I believe that when a film like the kind I've mentioned alienates the viewer, they are too easy on themselves and too harsh on the film when quickly labeling it pretentious and that there is a contrasting difference in not liking a film for specific reasons and it being a pretentious film just because the film takes you so far aback that you cannot find any appeal in it while others can (and those people in turn are frequently labeled snobs)

Well, I'm getting way off topic here (mostly because I don't have a lot to say about this particular film)

I suppose what I am trying to say is that the viewer should really step back and take a hard look in understanding the purpose and intention of the film they just experienced and were disappointed by before being so quick to label it pretentious. I have seen films I could label pretentious that many people would agree deserve to be labeled so, but if you give that label to most films you do not understand and have difficulty with, then what does that say about you?

The 1st part of The Cremaster Cycle was a disappointment, yet at the same time its alluring imagery makes it difficult to not dismiss its intentions. There was a lot of effort put into these artistic visuals but the pay off isn't fulfilling enough. I doubt I will appreciate this more in retrospect, but maybe there can be merit found in Part 1 after experiencing The Cycle as a whole. As I continue on with this experimental series, I remain optimistic but hopefully they won't all be this hard to sit through.

I could have been more critical because even what's on the screen isn't that appealing when compared to most arthouse/experimental films and I cannot recommend based on this film alone. I do however admire what they put into this and it has left me intrigued enough to keep going.