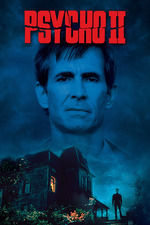 This is a tough one to discuss. What the hell can be said? It's one of the most unnecessary sequels ever conceived, but it's because of that fact that Psycho II gets more hate than it actually deserves. I don't mean all fans of the first film will enjoy, as it certainly isn't a good film, but it's also not bad, or I should say it's not THAT bad when compared to most shameless sequels.

I was one of those people who sympathized with Norman Bates the first time I watched Psycho. Not in the end so much as throughout it. He still is one of the most convincingly pitiful and psychologically distraught characters in fiction. What I enjoyed about Psycho II is that it took advantage of Norman's complexity in a decent way, and after awhile I was actually somewhat intrigued in watching his struggle in adjusting to a normal life.

Where the movie falls apart is with what else is used to hold it together. Of course because it's Psycho, there needs to be murders and mystery behind the murderer. For the first part of the film we are led to believe Norman is up to his old habits, but later toward the last third a number of twists are revealed and the execution of each is more absurd than the one before it. I still commend the film for two things: not going the easy redundant slasher route with Norman just turning right back into the titular Psycho and going on a killing spree. This time there is something (loosely) compelling that involves vengeful outside characters disrupting a mentally unstable man's personal life.

If it wasn't so campy nor part of a franchise, this could have been its own solid story. I think that's why I'm not bashing it so hard. Had this not been an unnecessary sequel to one of the most famous films of all time and instead it's own story of a psychotic man responsible for committing murders who has been rehabilitated but is now being stalked and harassed constantly by the people related to one of his victims would have made for a solid thriller. The best part of Psycho II are when it's primarily focused on Norman's personal life as he attempts to rebuild it for the better and escape his past demons while those harassments push his limits and gradually affect the mental health he's trying to stabilize. Where it falls flat is the slasher movie cliches, which is interesting to me. Psycho is considered the prototype slasher, and now here the first sequel takes its cliches from slasher movies that were influenced by Psycho in some way.

The biggest problem with the slasher aspect is that the whole primary story of Norman trying to fit back into society, while the most engaging aspect of the film, is constantly weakened by taking what made it so interesting and turning it stale. It feels like the slasher part of the film is there to keep Psycho II as a whole from falling apart. Instead it plays into why the movie mostly fails.

I honestly would recommend Psycho II to most fans of the original. Not because it's a good film. It isn't a good film and is guilty of many big No's-No's you're not supposed to do in a sequel (like showing a famous scene from the original as its opening scene) but I think the people who were fans of the original specifically because of Anthony Perkins and what he brought to the Norman Bates character could get some level of entertainment and appreciation from his performance this time around.

Also the final scene, involving a shovel is full of so much unintentional hilarity that I had to rewind it fifteen times.