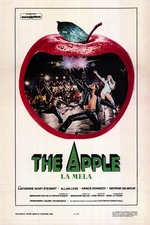 I can't remember the last time I watched a movie that made me feel like I was Alex DeLarge in A Clockwork Orange during the brainwashing sequence. But I envy Alex in that scene because I would have much preferred watching what he saw over this, including the metal talons stretching the eyelids out while potentially damaging my retinas. Actually, The Apple is somewhat similar to the footage that fucks Alex's head up so badly: Visuals of a cliche world run by tyranny and instead of literal gang rape, we have a film that figuratively gang rapes the audience as well the entire concept of what makes people love musicals.

I will just say from the start, I don't think highly of musicals. I don't hate them, but I prefer the more rock band ones like Purple Rain, Walk the Line and Velvet Goldmine, to name few. The only song and dance musical I ever appreciated was Rocky Horror Picture Show. I don't understand the appeal of Grease and I still retain the theory that at least half of the senseless killing sprees of the past decade are because Moulin Rouge was made. I can't prove it, but my opinion remains unshaken.

As much as I despise Moulin Rouge and wish it were a human being so I could have it slowly dismembered, I think I owe it an apology. I thought Moulin Rouge was an abomination, but it really isn't. It's just a terribly made film with equally atrocious music sung by respectable actors who deserved Turkish prison-esque punishment for their crimes. It is that bad to me, but it is no The Apple. No, The Apple is the final layer of hell of bad movies.

So why do I sound so ruthless, nasty and vicious right now? It's because of The Apple. I have seen some bad films in my time. Not "so bad it's good", but "so bad that I want to be stabbed to death with rusty spoons because that would feel much less painful than what I am enduring right now"...Films like The Howling 7, The Garbage Pail Kids Movie, and Coleman Francis films come to mind.

The tragedy is that the movies I just mentioned always show up on lists all over the world for what are considered the worst ever made. Why isn't The Apple? Supposedly this is considered a cult classic, but The Wiz deserves that title in a much higher esteem, even though it is also a terrible, terrible film that makes most people feel non-whimsical and in fact, terribly depressed, as well as confused and disturbed by the presence of Nipsy Russell and why he sung more songs than Michael Jackson did, but now I'm completely digressing.

I imagine if you were one of those douche bag, powdered-faced, leisure suit-wearing weekend warriors of the disco era, then you could probably find some level of appreciation or nostalgic value from this film, but to me it perfectly, and by perfectly I mean sadly encapsulates the obnoxious low point of that time. Shrill female vocals that cause sidesplitting headaches, lyrics that somehow are even more headache-inducing. And then the acting...oh my fucking GOD!!! The acting...it is so bad that thinking about it is making me emotionally unstable. Bad acting can be fun to watch, but when it's at its most unbearable and cringeworthy, as is exhibited with The Apple's protagonist, then it makes me actually consider choosing to tongue-fuck William Shatner's asshole with praise over taking in one more minute of such terror. I had more fun reading the subtitles for Salo than watching this emotionless fuck-up with the personality of a bear's shit struggle with one line after another.

The combination of the songs, the vocals, the dancing and lyrics....The Apple feels almost like something you'd see if the people behind Epic Movie made another of those films but for making fun of musicals. Except I honestly believe that would be more entertaining than this. I'm not just saying that for fun and giggles. No, I mean that. I truly, honestly do.

I really can't remember the last time a movie made me so physically ill and struggle to sit through the whole fucking thing. I honestly believe this was purposely made to be as obnoxious as possible...or maybe everyone involved was so coked up, Boogie Nights-style, that they were all out of their minds by the time the cameras rolled and had no logical comprehension of what massive damage they were about to cause to the musical genre and everyone unfortunate enough to buy tickets and sit through the visual equivalent of penetrating a head with a drill. Actually, maybe it was both. Maybe a Dirk Diggler-esque fuck-up was in control of this, complete with a pair of sunglasses that made him look like a complete dipshit and a haircut that made him somehow look worse. He stood behind that camera and demanded everyone degrade themselves in the worst ways possible, demanding his cast and crew savagely rape the very people giving them money to briefly extend their hopefully short careers. Yes, I imagine the audiences felt like farm animals being herded in for the slaughter. It really is tragic and unfortunate on all levels.

Years back when I saw The Howling 7, which might be the worst movie I've ever seen, it was something so terrible that I could recommend to fellow movie buffs just so they could say they have seen the worst movie ever made, but I cannot recommend The Apple to those people, not even to fans of musicals, not even to fans of Moulin Rouge, because I could never be as sadistic as talking a fan of Moulin Rouge into watching this, even if they kind of deserve it for liking Moulin Rouge...

Trying to convince anyone to not watch this feels like trying to talk a suicidal person out of jumping to their death. And if everyone keeps away from The Apple for the rest of their lives based on this review, I will truly feel like a hero.

Don't believe me? Think I'm exaggerating? Watch this magical little piece and see if you can actually last through less than three minutes of some of the most obnoxious bullshit you will ever have the misfortune of experiencing.