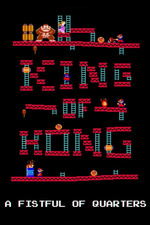 The King of Kong: A Fistful of Quarters

This is one of the reasons why I love Letterboxd. I put off a movie I’ve been meaning to get to for years, then stumble upon reviews that light a fire under my ass to watch it ASAP.

The King of Kong is one of those kinds of documentaries like The Cove, American Movie or Dig!, where you find yourself immersed in a story so cinematic in its level of entertainment and intrigue that it borders on feeling like a feature film, but this story is all too real and surprisingly much more engaging than anyone could have ever expected. It sort of reminds me of a feature length episode of Seinfeld or The Adventures of Pete and Pete in how it entertains with a subject that seems rather small and hardly significant, except unlike those, for a story about grown men obsessed with playing arcade games,The King of Kong is surprisingly balanced in how seriously it takes itself.

The reason Donkey Kong is the particular focus of these gamers is because it is considered by many to be the hardest arcade game of all time and is regarded as one of the ultimate challenges within gaming culture. It’s like entering a boxing match against one of the most powerful and vicious undefeated boxers. You wouldn't think that would be the case with a story that revolves around beating the highest score on Donkey Kong, but one of the aspects in this particular doc that I find most accomplishing is how within the first ten minutes it succeeds at putting the audience in the appropriate perspective necessary for immersing themselves in a fully realized character study.

It's typically difficult to put in perspective for non-gamers this appeal, as most outside the spectrum see them as nothing more than a waste of time. Being a seasoned gamer, I could pick up on the collective mindset as well as the adrenaline rush that comes from skilled competitive gaming. The King of Kong provokes emotions out of the viewer by showing us different and opposing perspectives of what draws these people to their passion. We see how certain gamers enjoy the fun of competitive gaming, while we see the whole other end of the spectrum with gamers who take their passion way too seriously and how it affects the way they carry themselves.

Steve Weibe is the hero of the story. He is a prodigy with a passion for many things, but where we see his inner conflict is in trying to decide throughout whether his greatest dedication is to his family or beating Donkey Kong's highest score. That sounds like a loser, right? He is not, and The King of Kong does an excellent job in explaining his dedication and love for the game with enough intrigue and even sympathy, but not so much that he seems like a paragon of good. Steve is flawed just like the rest of us, and his greatest flaw is his imbalance between how his passion alienates his family while also showing that he is still a wonderful husband and father regardless. His wife has her reservations in regards to this particular passion, but her love for Steve helps her in accepting and understanding his dedication. She admires him for it, but she does not deny the toll it takes on their family life. Steve's dedication truly is admirable. One could say he's egotistical, and that may be true to a point, but once we understand the way Steve's mind works, its not so much his ego that drives him. His dedication to accomplishing his goals not only drives him, but it centers him as well. It's rather complex: the guy never seems pleased with his accomplishments and yet his ambition and the hardships themselves are what make him most content. It feels somewhat tragic, except that he at least has his family to keep him sane and happy with his life outside of such hyper-passionate expectations.

Billy Mitchell is The King of Kong's hook that reels your undivided attention in. Usually when a documentary shows its subject in an unflattering light, the director is almost always accused of manipulating their film to do such. Billy Mitchell has to be one of those rare occasions where a person who was the central focus of a documentary obliviously went out of their way to present themselves in such a light. The guy actually comes across like some Lex Luther cliché crime boss/supervillain found in comic books and James Bond movies. Billy expects everything to go his way and he uses his reputation and influence to keep it so. Like such villains, Billy prefers to have his own breed of thugs in the form nerds who antagonize and intimidate his nemesis, behaving tastelessly like when they show up at Steve's home and accost his family, trying to find any sign of fraud or falsehoods regarding his expertise. Billy even uses this bizarre grip over his disciples to mess with Steve's head when he comes to Funspot Family Center aka the Shangri-la of video game arcades to begin the crusade, his thugs trying passively to psych him out during his game sessions. One in particular (can't remember his name, but he wore glasses and an orange shirt) seemed to start off loyal to Billy in trying to psych out Steve, but once the disciple realizes that he has before him a worthy successor, he enthusiastically gathers the other gamers around Steve, watching in awe as gaming history rewrites itself.

To top off the intriguing ridiculousness, throughout the film, Billy's disciples call him regularly and inform Mr. Big Boss on Steve's current status while he sits idly on his couch as if it were a king's throne. The higher Steve’s score climbs, the more worried Billy visibly gets. When a disciple admits being awestruck by Steve, Billy's face reddens with rage. He refuses to be beaten and will do whatever it takes to remain at the top, even if it means going against everything he once stood for.

I always found that competitive gaming, while highly competitive to the point of being aggressive, is perhaps one of the least devious of any form of competition. You will always have the overachievers who are determined to be the best to the point of alienating their competitors, but for the most part these people are in it for the love of the game and don't bother looking any further beyond the fun they get from it. Perhaps Billy was once this kind of person. Based on the film's coverage of his past, he seems to have always had a big ego. No problem there, but when you see this man as a grown adult, that is the crowning achievement of The King of Kong as a character study.

If you read more reviews of The King of Kong on Letterboxd you will see that about 99% of my fellow members articulate their burning hatred of Billy. I am not one of those people. I do not hate Billy Mitchell. I do not hope he dies in a car fire, nor do I believe if I ever met him that the first thing I'd want to do is punch him in the face. Having said that, he does deserves that level of ire from most if not everyone. I just feel sorry for him. I pity him. I pity him because while he is a hateful and spiteful person, The King of Kong shows that no matter how successful he is, in Billy's eyes, his greatest success was and will always be the high score on Donkey Kong. Billy never makes it clear as to why the high score is the most important part of his life, but I found it absolutely fascinating how he was willing to throw whatever morals he had left out the door for the sake of retaining that particular achievement.

Like pretty much everyone else who has seen The King of Kong, I walked away feeling hopeful and even proud of Steve, while Billy's ruthless ambition left him looking like nothing more than the pathetic loser he is and I suspect will always be. Steve is the one who walks away with his integrity intact. I won't say whether he succeeds or fails, but what I will say is that either way, he still has his family, and they still have him. The King of Kong does a solid job in showing us how Steve loves his life outside of his passions. He is human. He has a gentle soul and a big heart. There is no misinformation or manipulation there, and the only real flaw Steve shows is how overzealous he can get with his passions. As for Billy, whether he succeeds or fails, will never be a winner. He thinks he is, but his thought process keeps him from ever being one. He’s a spoiled brat manchild with an ego the size of China who owns a financially successful company and immerses himself in brown-nosing sycophants and superficial supporters. Billy seems content in the beginning because of his success. Steve is doing what Billy perceives as a threat to said ego, and it absolutely is. He has everything he could need but what he wants most is that high score to always be his.

I still can't let go of those scenes where Billy sits on his couch answering his phone like some Mr. Big type who calls all the shots. It would be disturbing if it weren’t so pathetic. The real jaw-dropping moment comes when the Champion and the Challenger finally meet. Billy really is an elephant in the room from beginning to end, but it's that scene which details it so effectively. It’s anticlimactic, but the tension between the two is brutally real in the context of rivalry. In the beginning, Steve implies he has respect for Billy as a gamer, but as the story progresses, Steve witnesses his rival’s true colors, and what they paint out is a megalomaniacal coward who is willing to throw his own rules out the window in order to keep his ego from ever getting bruised.

Recommending this to fellow gamers is a no-brainer, but it's all the non-gamers who need to track this documentary down. The King of Kong is how docs should be: fascinating, emotional and engaging, but the theatricality of its story is the perk that truly seals the deal.