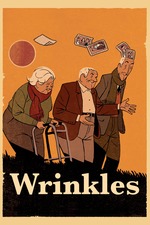 Yikes @ashitaka I have no idea rather to thank you for asking me to watch this for almost this entire year or to spit on you.

Wrinkles is one of the most underrated and overlooked films of this decade. If this movie was live action and directed by Truffant or something people would be declaring this like a Criterion Collection staple. I implore you to watch this on Netflix when you can- because this is one of the most unrelenting and dark animated films, or just films I've ever seen in general.

First off, the cinematography in Wrinkles is astounding. I feel like in some more generic animated movies (like lets say something like Emoji Movie) they forget they have to do cinematography because ahh its animation who cares right we aren't using cameras? Wrong. This is a film, and I so appreciated the fact they thought up every shot and every angle and even used a lot of build up and even visual storytelling to get its point across.

Not to mention- the story and the writing itself is just great. This layered screenplay refuses to sugarcoat anything- or give us simple answers. The films story unfolds before you and it for sure got me wrapped up in it and emotionally invested. There's one sequence that without spoiling anything was eerily similar to my car accident and it kinda wrecked me.

This entire film wrecked me. It made me think about my life, and my legacy and how our days are numbered so we need to feel as much as we can while we still remember it and tell someone we love that we love them and do what we are passionate about before its too late.

This is one of those films that will make you lay awake and question your own life, and I can't give a film higher praise then that.

Please seek this movie out and give it a chance on Netflix, just know what you are getting yourself into, an emotional breakdown and view on the overall human condition.

I feel like all fans of cinema need to see this though, its just crafted and told so well I'm shocked it doesn't have more attention then it does.

I loved it, even if it did mess me up.