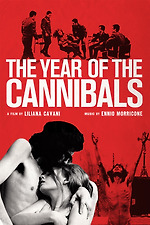 The Year of the Cannibals

The title I Cannibali refers to the state which in this tragic story from Liliana Cavalli owns everything and decides the fate of all citizens. Anyone who opposes the rules or deviates from the norm is met with lethal force, and is either imprisoned or killed and have their dead body thrown like garbage onto the streets where it remains lying seemingly as a warning to others to not attempt something similar. This has happened to a lot of people before we as viewers enter the story, and is also what eventually happens to Britt Ekland’s Antigone and her companion protagonist. Yet, the film concludes, despite the odds stacked against them, the people will keep fighting for change. A disturbing look at the workings of a totalitarian regime, the film could be a comment on Italy's past or intended as a bleak vision of its future - perhaps it's both.