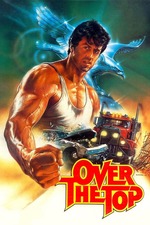 Sylvester Stallone is well known for his portrayal of the fictional sports legend, Rocky. But what many don’t know is that he played another sporting tournament enterer, Lincoln Hawk, but instead of boxing, he’s an arm wrestler (which I never even knew operated professionally until now).

With his mother falling ill, a 12 year old boy is united with his father, Lincoln Hawk, who had previously abandoned the family. Hawk is a trucker and arm wrestler, yet he bonds with his son who was previously hardened and uninterested in spending time with his father. When the two of them are getting ready for the grand arm wrestling tournament in Vegas, the boy’s rich and selfish grandfather sends his goons to bring the boy back to him.

Despite being stuck with a cheesy script, Stallone works with what he has and delivers a fine performance. I’d say he embodies the troubled but caring father figure his son needs, but he thankfully doesn’t come off as annoying or a cliche movie dad. He also has decent enough chemistry with his son (played by David Mendenhall), leading to a believable relationship and dynamic. Fresh off of an academy award nomination, Robert Loggia portrays the villain in this Cannon project. Loggia is honestly kind of charming and fun to watch, even though he doesn’t come off as completely evil. Though I can’t help but feel his talent is severely wasted.

Unless you consider arm wrestling an action sequence, Over The Top doesn’t offer to many. The ones that are legitimate action scenes are usually short and involve cars and trucks. The chase ensuing after Hawk’s son is kidnapped is fairly entertaining, having high enough stakes and good enough car crashes. Now about the arm wrestling, the scenes aren’t quite as entertaining as in other sports movies (karate, boxing, wrestling etc.), but they held my attention for the most part. The tournament had a similar vibe to The Karate Kid, which isn’t a bad thing, considering how iconic that tournament is. With a montage of wrestling going on, and plenty of loud hype-up beats, it feel like that 1984 sports flick. On its own, I think the tournament works, with Hawk’s son as the emotional drive and a satisfying conclusion.

Now I’d never mistake this for a masterpiece or even having much substance, but I can’t deny that Over The Top is very entertaining. It even has Sylvester Stallone and a good father and son story to pull it together. An experience worth having, especially if your a fan of a good cheesy B-Movie.