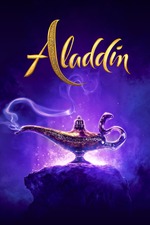 What was good:
- Naomi Scott is great as Jasmine. Her singing voice is splendid
- I liked the addition of Dalia
- The non-CGI sets looked pretty good
- Aladdin and Jasmine have some chemistry that saves A Whole New World from making me feel literally nothing

What was bad:
- Guy Ritchie's directing. Stop with the slow mo. Stop with the dumbass partonising flashbacks to an event from 3 minutes ago
- The third act is entirely changed and instead of hypnotised Jasmine in an hourglass we get A FUCKING ZOMBIE MUTANT IAGO CHASING ALADDIN AND JASMINE WITH THE LAMP ON THE CARPET
- Friend Like Me becomes the most soulless musical number since live action Be our guest.
- Will Smith top to bottom is just too loud and in your face. I know this is by design but he doesn't add anything to this story. Genie is and always will be Robin's role
- Taken 3 fence jump level editing
- The narrative framework set up at the beginning of the film which is all but dropped until the film fucking just dumps a link back to it in the final 10 minutes
- Jafar is played abysmally in a role that should've gone to Riz Ahmed or Ben Kingsley
- I didn't mind Genie's and Dalia's flirtation but her realisation over who he is was absolutely uninentionally hysterical
- Jasmine's musical number had me and my friend in fits of laughter in its downright lunacy. It has to be seen to be believed
- I can't tell if Mena Massoud is deliberately terrible in some scenes or just straight up terrible.
- It feels like a DCOM
- Everything wrong with this film is easily summed up with the simple fact that a DJ KHALED song plays in the credits. It is a farce.

It's not the most offensive film to ever exist but Disney have managed to suck the life out of a colourful and beautiful film. They are so out of touch with what makes their original films so loved in the first place that if they keep these monumental wastes of money up, audiences will suffer at the hands of unoriginal cinema kept alive only by nostalgia. This film exists for no reason