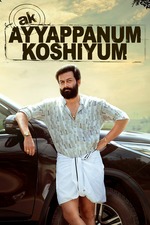 This was a pleasant surprise. Sachy's screenplay is as nuanced and layered as they come in the industry these days. Corny as it may sound, right off the bat, it deserves applause for diminishing the appeal in Malayalam cinema for a rich, conventionally handsome, upper-middle class man showing off his bigdick to a Dalit working class man (who ironically sports a disgusting casteist last-name) on account of his pride.

It only seems appropriate to cast Renjith, a man who glorified feudal-patrairchal shenanigans much too many times in his writing/directing career, as the disgusting personification of every kind of privilege Koshy enjoys. He comes off pathetic rather than intimidating (intentionally or not) and that works. At the same time, Biju Menon pulls off his character with such enviable ease that everyone pales in comparison.

More than the obvious commentary on the uneven playing field caused by class disparity, the relatively hidden exploration of masculinity warrants discussion. Koshy is suffering from acute savior complex, which might be some sort of an occupational hazard that comes with being a military man. He got triggered for the first time when he was stripped off the privilege that came with his veteran status. Another time, he is outraged at the very thought of his nemesis entering his home and immediately takes it as a direct threat against his wife and children. He is the kind of man who has a pathological need to save the women in his life. Naturally, he doesn't approve of his friends going after Ayyappan's family. He is the kind of man who respects women because they are someone's wife/mother/sister and he is certainly not the kind of guy who would tolerate his wife's insolence without slapping her first even when he agrees with her. Ayyappan, on the other hand, is in relationship with an independent being. The moment his wife assures that she is fine, his responsibility as a partner/fellow human being ends and he moves on.

The tit for tat for tit for tat series of events beautifully shifts the moral highground between the leads, much like a long badminton rally, to the inevitable final showdown. This so called non-narrative that takes up most of the run-time (I wouldn't cut a single scene) is particularly brilliant because the film seems to be in constant dialogue with the audience and allows us to pick whatever side we want at any given point. That being said, Ayyappanum Koshiyum couldn't be more sure-footed in terms of the big-picture political statement that it endorses.