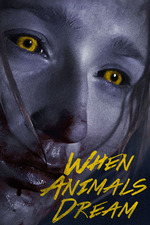 I chose this randomly while searching on Netflix. I almost didn’t because I think the cover looks stupid, but I’m glad I did.

A dark, Scandinavian coming of age tale. Marie, who is becoming a young woman, discovers an odd rash accompanied by some hair growth. What she doesn’t know is that it is much more than that. Marie slowly unravels the secrets of her family, her mother’s mysterious disability, as well as her own inherited traits.

This is a slow burn monster movie, which are generally some of my favorites. You could say this is somewhat equivalent to the werewolf version of A Girl Walks Home Alone at Night. Not nearly as good as that, but werewolf movies rarely are so some unknown reason.
The acting IS really good though. Sonia Suhl’s performance is great, and she really knows how to turn on the charm and confidence. But I was even more compelled by her father, played by Lars Mikkelsen. He was completely believable and really tore at my heart strings.
Overall I really liked this movie and I don’t know what I would personally change to improve it, but I did feel it was somehow a little lacking.