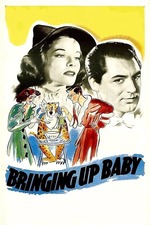 I've seen this movie a handful of times before but not until my most recent viewing did I really start to wonder, "What is it about?" Initially I told myself it was about love, but that seems insufficient. Yes, the story's knotted around David and Susan's relationship, which begins with an aggressive meet-cute and resolves with a sort of reconciliation atop some scaffolding. ("And you still love me?" says Susan, met only by David's stammering protests. "You do?") But would you really call it "romantic"? I'm not sure the vocabulary we usually apply to onscreen love affairs really fits the dynamic between this blue-blooded agent of chaos and the paleontologist who's in her thrall. It's more like antagonism that blossoms, involuntarily and inevitably, into collaboration. Which, I suppose, you could put under the heading of "love," but that still feels too neat and a bit misleading.

The other major candidate that jumped to mind when I pondered Bringing Up Baby's subject matter was language—particularly language as a weapon, as music, as anything but a means of accurately conveying information. The pace of the movie's dialogue is dizzying (which is part of why it's so slippery, and why I have such a hard time getting a handle on it thematically) yet Christ, I think you could count the number of clearly spoken truths in it on one hand. Nothing is stable here: not identity, not power, not even any notion an objective reality, not when Susan can open her mouth and instantly shift the terms of discourse 180°. Even the characters' surroundings, be they a riverbed or the door of a prison cell, can't be trusted.

Everything in the movie is subject to this physical and verbal fluidity. (Maybe that's what the movie's about. I don't know. We're past that now.) It's a Pandora's box of comic bits, riffs, and pratfalls, with Katharine Hepburn as its lovable Pandora. She gets such palpable pleasure out of distorting and destroying the world around her—it helps, no doubt, that Susan's insulated by her family's wealth—and this same pleasure carries over to the viewing experience. Hawks and his ensemble play every lightning-paced scene against expectations, as if absurdity were an artistic virtue they were building toward, and this keeps the movie full of joyous surprises no matter how many times I see it. It's so loose, ridiculous, small in terms of scope and incident, titanic in terms of the laughter induced.