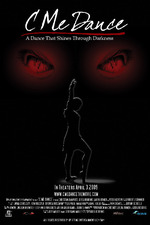 "Well, in Variety it says the next big three movies scheduled for release have been shelved by the studio executives! It's reports [sic] that they say that they may harm family values, and they're never gonna release them!"

That quote is taken verbatim from this movie about a teenage dancer with terminal leukemia who can telepathically endow those around her with faith in Christ. It is, shall we say, not very good. The acting's amateurish, the photography's inept—I mean really, why would you foreground a coffeemaker?—and the soundtrack consists entirely of tepid Christian rock. Sometimes a guy in a devil costume pops up to growl vague threats. The girl's dad dates her oncologist.

Oh, and the movie opens with a two-minute remake of Duel that's never explained or revisited. Incoherent and blessed with the production values of high-end public-access TV, C Me Dance may not be the most effective evangelical tool, but I'll be damned if it didn't give me a few laughs. (Though Christ, the prospect of a world without movies that harm family values? Now that's nightmarish.)

Attack of the 50 Foot Woman