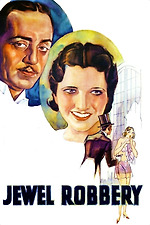 When all the real men disappoint you, what option is left but to invent one? Make him debonair, a menswear connoisseur, with a thin moustache and a boutonniere. Make him a gentleman thief with a gun in his pocket. (Or is that a gun?) This is the fantasy you cultivate whether you're a moviegoer gazing up at William Powell from a mildewed theater seat or a Mitteleuropean baroness played by Kay Francis who has unconsciously summoned him into her life. He follows her from boudoir to parlor to divan; seduces her by not being her husband. His apartment becomes her kinky Pre-Code utopia. "You can't invite me to do anything," she admonishes. "Whatever you do must be done by force." Together they tumble through production design comprising a chain of vaguely erotic jokes: a giant bouquet, a box of drugged (marijuana) cigarettes, an Orry-Kelly dress whose hem gets caught in a locked door. They flirt and sip cognac; reality never intervenes. Warner Brothers workhorse William Dieterle, who directed this and much later Portrait of Jennie, must have loved the gleam of diamonds struck by light. So do I.