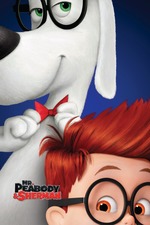 Movies like this fascinate me. They're designed to rake in opening weekend grosses and DVD/Blu-Ray sales, but they have the cultural lifespan of a mayfly. While some kid somewhere may cherish this on this on home video, most people have probably forgotten it by now, a mere six months after its release. I enjoyed watching it because the filmmakers' dilemma acted as subtext in every scene: "How the hell," they may have asked, "do you adapt a bunch of five-minute animated snippets whose whole raison d'etre was history puns into a feature-length film half a century later?" Taken as a whole, Mr. Peabody & Sherman constitutes one answer to that hilarious question.

Obviously, you need a plot. The film's core is still those brief, time-traveling vignettes (in the French Revolution, ancient Egypt, Renaissance-era Florence, and the Trojan War), but now they're wrapped up in a framing story where Mr. Peabody has to impress the WASPy parents of his adoptive son (!) Sherman's elementary school nemesis as well as an evil social worker, lest the boy be taken from his custody. Let's unpack that plot for a second. The title characters' relationship has been overhauled; once scientist/assistant, they're now father/son. This makes possible the film's thematic hook, which is the conflict between overprotective parents and increasingly independent kids.

Introducing these ideas to a cartoon that had fuck-all to do with parenting was a savvy move on the part of the screenwriters, since now they have an engine for the plot and stakes on which to pin the climax. Mr. Peabody has to accept that Sherman is growing up, and Sherman has to understand that Mr. Peabody imposes rules out of fatherly love. Granted, this isn't exactly Ozu. The material's clumsily handled and slathered in goopy sentiment. But the point is that it's a structuring principle for the whole movie. It also provides an antagonist in the form of that social worker, voiced by a bellowing Allison Janney, although Jesus fucking Christ it's 2014, and movies still think all social workers are evil?

The movie abounds with eye-rolling clichés like that, too. Robespierre speaks like Inspector Clouseau, while da Vinci speaks like Mario. Every historical setting is reduced to the broadest caricature possible. To give these forays into the past a properly 21st century zippiness, each one culminates with an action set piece, and during each of those Mr. Peabody has a moment of slow-motion clarity, à la Guy Ritchie's Sherlock Holmes movies, where he devises an impromptu, villain-defeating Rube Goldberg machine. As for jokes, the film retains Peabody's adventure-capping puns from the original cartoon, then adds a forced catchphrase (Sherman's "I don't get it"); there are some crass visual gags where, say, it looks like the Trojan horse is shitting out soldiers; and also a handful of those for-the-adults allusions to rather kid-unfriendly works like Einstein on the Beach or Spartacus

As the above may indicate, this is not a very funny movie. (And if I may digress for a second, the thing about those "for-the-adults allusions" is that they go over kids' heads, but they're also too vapid for adults to laugh at. What self-respecting person over the age of ten thinks it's funny for Einstein to cross a New York street while shouting, in Mel Brooks' voice, "I'm walkin' here"? And what person under the age of ten could ever appreciate that lousy joke's web of pop culture references? Instead of interrupting a kids' movie for a quick sop to the parents in the audience, why not just write better fucking jokes?) The voice acting's on the shoddy side, too—see those bullshit accents—though kudos to the reliable Patrick Warburton, who essentially reprises his Kronk from The Emperor's New Groove in order to play a frat bro Agamemnon.

Warburton's presence is among the few really entertaining aspects of Mr. Peabody & Sherman. It just so consistently takes the easy way out, whether in terms of humor or pathos or plotting. (Would you believe it has two different faux-shocking false deaths?) Worse yet, it's consistently misogynistic. The women in it tend to be either one-note bitches (the social worker, "Mona Lisa") or one-note ditzes (the WASP mom, a cake-gobbling Marie Antoinette). The one exception is Sherman's nemesis, the ditz-bitch Penny, who gets redeemed by the end through her and Sherman's shared crush on one another, because the audience needs to know that these 7-year-olds are heterosexual. According to this movie's jokey version of history, men do things, while women get married or painted or guillotined.

Mr. Peabody & Sherman was made on a budget of 145 million dollars.