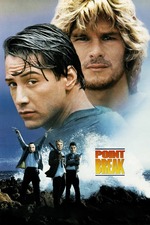 2) A few minutes later in Point Break, Keanu Reeves is ordering lunch from a sandwich shop across the street from the bank he and Gary Busey are staking out. Initially, the camera watches him through the shop's take-out window, but then it moves to the right, reframes him, and racks focus as a car pulls up to the bank and four armed men jump out. Keanu's oblivious, only noticing the car once it's empty. Then the camera wryly moves back to the left as he grabs his lunch and leaves. It's a deadpan joke told entirely through cinematography.

3) A few minutes after that comes a foot chase between Keanu and Swayze, climaxing with a pair of Leone-style extreme close-ups on Swayze's emotive blue eyes. He's still wearing his Ronald Reagan mask, and it's jarring to see his tender gaze within the recesses of its plastic skin. (I love the uncanny flavor that weird masks add to heist movies like this, Drive, and The Town.) Swayze's are Kuleshov effect eyes, and in them I read "You know you can't shoot me because we have this thing, you and I, and I'm sorry but not too sorry because this is who I am."