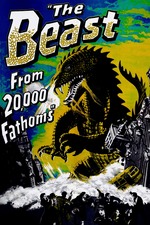 It all starts with atomic testing in Baffin Bay. The creature stirs from eons of icy slumber, rising up like a saurian Cthulhu and rampaging down the Atlantic coast. Two thirds of the movie pass before it swims into a Manhattan harbor. Most of that time is spent with a pair of scientists as they investigate the beast, fall in love, etc. Once the titan makes landfall, though, it dwarfs any notions of human desire. Traffic halts; pedestrians run screaming; police open fire. "180 Known Dead," claims a newspaper insert. "1500 Injured." What is this monster? A giant symbol, soaking up night sweats induced by memories of war? Or divine punishment for military-industrial hubris? What is this monster, which will be penned inside a burning rollercoaster and irradiated until it dies? This monster, well, this monster is beautiful: a stop-motion sculpture of jaws and sinew and tail, shaped by Ray Harryhausen's fingers, clawing and snarling at a succession of miniature sets. Its beady eyes glow not with intelligence, but with malice, atavism, life. What a perverse honor—to be devoured by a god like this.

The Man from Laramie