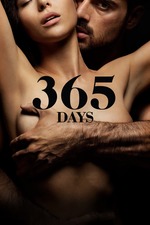 What is currently the most trendy & exciting movie for many, ended up being one of the absolute worst movies of the year for most (or at least us on Letterboxd). Massimo is a member of the Sicilian Mafia family and Laura is a sales director. She does not expect that on a trip to Sicily trying to save her relationship, Massimo will kidnap her and give her 365 days to fall in love with him. Since I knew the audience would mostly be fans on YouTube, I kept my review as positive as I could (even though I gave it such a low score). It isn’t that I tip-toe’d around hostility because I’m scared, but I don’t want the channel becoming a target of this fanbase. It was bad enough when I hated on the 50 Shades franchise.

The fans of 365 Days are passionate, and I respect that. I’ve gotten plenty of comments talking about how hot, steamy, and sexy the “scenes” in this movie are. I’ve seen plenty say it’s their favorite movie of the year. The only thing I am curious of is why? Other than the steamy sex-scenes, which apparently make the movie good, why is this movie good? Is the relationship sensible? That’s a resounding no. Are the scenes constructed cohesively? This movie hasn’t even heard of cohesion. Is there anything good about the script? No. Is the acting solid? The acting is fine (just as good as 50 shades), but it’s forgettable because of the nonsense they were spouting out. The only positive I am seeing is how hot the sex was.

My biggest question is how does this make the movie good? I get it if it turns it into a guilty pleasure, but how on God’s green earth is this movie good? It’s actually atrocious, but that may be too aggressive so I’ll scale back. I’m just not a fan of the idea behind this film. He kidnaps a woman to make her fall in love with him. It’s morally wrong from the get-go, yet they expect you to root for him as some kind of a hero. Laura is likable enough, but her decision-making is baffling. The film ends with a cliffhanger that will have fans talking, but it was far too late for me at that point. I take nothing away from someone who enjoys this movie, but I found absolutely nothing to like. It features boring cinematography, and it’s messy from an all-around filmmaking standpoint. I see it working as a fantasy for some, but I can’t give it a pass because of that.