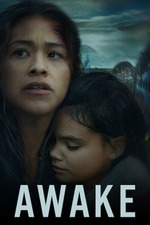 After a devastating global event wipes out all electronics and eliminated people's ability to sleep, a former soldier may have found a solution with her daughter.

Netflix has attempted to find their next Bird Box for a few years now, and Awake is their next apocalyptic film to hit the platform. This time we are dealing with the concept of sleep (or the lack of it), and Gina Rodriguez’s Jill is leading the way. She is compelling, and her presence is truly felt here. Her daughter, Matilda, is special because she is one of the only humans that can actually fall asleep. The first act features a few riveting elements, and there is an interesting setup at the beginning. There is definitely a lack of character development, but the entertainment factor and cinematography kept me hooked. As we enter the second act, and the story is beginning to unravel, the momentum comes to a screeching halt; from there, the plot slowly becomes more uninteresting. It is a shame because of how incredible and relatable this concept is, but the film’s intensity disappears.

We all can go without sleep for awhile and become cranky (and some become a bit crazy). Imagine going without sleep for days. This eventually spells bad news for anyone who is effected, as death is inevitable after the mind goes. A lot of the film is spent watching people slowly begin to go crazy due to lack of sleep, and that is fun in a way, but the film never truly embraced the insanity. Awake continues to stay serious through the most ridiculous moments, and the character depth is severely lacking. The performances are solid (other than a few), but the characters themselves are uninteresting. The film just doesn’t capitalize on that solid start, and I had so many questions when it was all over. Not every film has to answer every question, but Awake never really answered anything. The final scene also left me completely dry, as it was almost the opposite of a satisfying conclusion. It isn’t all bad, but the film is an overall misfire on Netflix.