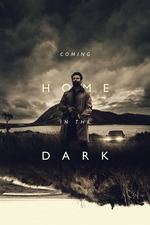 Coming Home in the Dark

A school teacher is forced to confront a brutal act from his past when a pair of ruthless drifters takes him and his family on a nightmare road-trip.

An intense Thriller was what I was looking for with Coming Home in the Dark, and that is exactly what I got. A rousing directorial debut from James Ashcroft brings us a tragic story wrapped in the bow of a terrifying road trip. The big surprise here is Daniel Gillies (JJ’s son in Spider-Man 2) who delivers a haunting, wild, and uncontrollable performance. It starts out simple but immediately take a turn when “that” happens. Then the family is taken hostage, but we are trying to figure out the reasoning for it all throughout the first two acts. Doors slowly begin to open up, and it becomes that much more interesting. The film does stall in the second act, as it doesn’t really feel like it knows how to fill part of the run-time. It is unfortunate because of how rousing the opening is, but the film thankfully brings it all home by the end. It is shot well, intense, and full of impactful violence. This was a brutal but interesting final film on the second day of this festival.

🔙Eight for Silver
🔜R#J
🔜Marvelous and the Black Hole