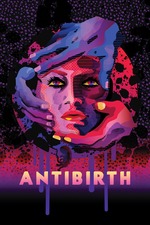 Minus four stars for wasting Natasha Lyonne and Chloë Sevigny. Or maybe it's plus one star. I don't know anymore, and I don't care. All I know is these VOD exclusives, which grant any moron with a camera and a laptop direct access to every home in the world, have resulted in more wasted time than I care to think about. I really do miss the gatekeepers of old, through which even bad films that managed to squeak by, showed some degree of professionalism, and worthiness for criticism. In THAT world Antibirth could only champion the plight and necessity of film critics everywhere. But in the here and now it can only hasten their freefall into pointlessness. Film has been cheapened so much, that small, guilty pleasures are easily mistaken for the whole, a fact that can never be up for debate because it's always "on to the next one."