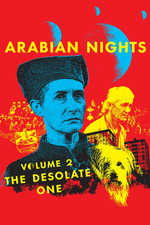 A six-and-a-half-hour opus divided into three parts by Portuguese director Miguel Gomes, Arabian Nights singlehandedly, and quite exhaustively, redefines the political film. Inspired by the severe austerity measures that crippled his country a few years ago, Gomes beautifully blends fact and fiction into a searing magical realist document of governmental negligence and more importantly, the strength and resilience of the people affected. Borrowing the structure of the centuries-old One Thousand And One Nights, Arabian Nights is able to effortlessly move from story to story, reality to fantasy, incorporating both narrative and non-narrative styles, that becomes nothing less than miraculous. Criminally underseen and underappreciated.

Volume 2: The Desolate One was the Portugese entry for last year's Academy Awards, but sadly the powers that be thought Theeb a better selection. This middle chapter is the most fascinating of the three films, opening with a public trial that ultimately implicates everyone in attendance, and closing with a little dog named Dixie and her many different owners in a poverty-stricken tenement development. Gomes shows the plight of these burdened citizens in ways that are never preachy, endearing the audience to them through simply observing their day to day experiences, in the ways they deal, or don't deal, with their various hardships, the understanding ever-looming that this 150 minute film represents only a few chapters out of the millions affected.