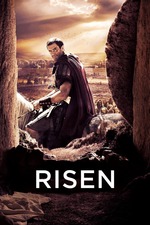 Kevin Reynolds has consistently impressed throughout his career, with notable highlights The Beast, Waterworld and Rapa Nui earning him the benefit of the doubt in his more problematic works, like Risen for example. What begins as a fascinating story of the dangerous political climate in Jerusalem surrounding Jesus' crucifixion and resurrection, mining the Bible for narrative over theology, abruptly deteriorates in the second half into pure fodder for the faithful. It might have helped if Fiennes' agnostic Clavius was developed beyond the hired muscle who suddenly witnesses a miracle, but then dramaturgy is probably the last thing you should expect from Sony's Affirm Films. At least for a good forty minutes, in Reynold's hands, there's a glimpse of the Jesus movie that I'd really like to see.