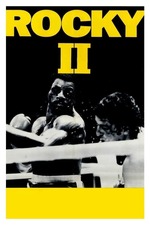 If you needed further proof of how director John G. Avildsen was more responsible for Rocky's greatness than Stallone, I present to you Rocky II, written AND directed by the Italian Stallion himself, and total garbage compared to the original as far as I'm concerned. I just don't get this movie. Stallone goes so far out of his way to blast heartwarming goodness out of Rocky's ass that the character becomes a parody of himself. All the juvenile one-liners, and the incessant, cloying Hallmark moments suggest Stallone was completely out of ideas, and just decided to run with patronizing the audience. And Apollo Creed? Why is he so hell-bent on a rematch? He looks pathetic, preening himself, and trash-talking on national television, while Stallone for the most part ignores Rocky's national attention, hoping to duplicate the charm of the original when the arc of the story is basically screaming for it. The fight sequence is good, but considering Stallone opts to replay almost the entire fight scene from the original at the very beginning, I could have just as easily turned it off right after that and been satisfied.