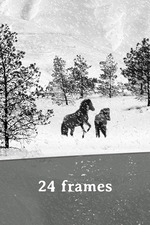 What can be said about 24 Frames that isn’t self-evident in its construction? A curious phenomenon swirls around Kiarostami’s last film, which is most fascinating in how it has rendered critical writing inert. A spiral of intricately linked tautologies only serves to describe the film’s mechanical function as digitally manipulated still photographs, signaled by the film’s opening text. Contra Blake Williams in CinemaScope, 24 Frames is nothing but an intellectual exercise, one that is wholly determined by the sacred reiteration of facile statements: film and photography are related, film is duration of time mediated through a frame, all film is a genealogy traced to the original moment of the Lumiere actualities. While the compositions and still framing give space to meditate on these observations, the endless reiteration of them does not account for the reality that they are applicable to any film from any period. From “slow cinema” to acid editing, the homemade avant garde to Disney tentpoles, from the Latham Loop to the nonlinear workflow, all of cinema is duration of time, is indebted to actuality, is composed through a mediated technological frame. Whether 24 frames per second or 30, this duration can be atomized into a series of still frames. Is it radical to slow down and stretch out these basic building blocks of cinema? Perhaps amidst anxieties of fast and stupid blockbuster films it is, but in all honesty The Commuter is a far more interesting experiment in duration, composite imaging, and built-in parallels to L'arrivée d'un train à La Ciotat.

The central comparison of Kiarostami’s manipulated still frames to paintings is a dubious one. Painting, we are reminded, is a snapshot of a single moment in time, obsessively constructed by the artists. But what we see are not actualities but abstract symbols rendered by the craft of the artist. Bruegel’s birds and dogs and trees are a series of brush strokes, lines, shape, and texture, that communicate images given meaning by our vision. The shape of a bird, the line of a tree. Kiarostami’s composites function as collage work, or videogame composite imagining. There is a disturbing violence in the way he manipulates captured (actualities!) movements of animals and digitally animates them into his sequences. They lack the symbolic and tactile construction of a painted animal or scene, but neither are they actualities. The moving image of horses or birds is transmogrified into artifacts. They are neither paintings nor actualities. 24 Frames, for all its apparent indebtedness to the Lumiere brothers, lacks the central magic of their films. Regardless of whether one is placing their documentations into the lineage of impressionist painting, they captured unscripted moments in time: natural phenomena, “the wind in the trees.” 24 Frames is hollow by comparison. We never see the magic of actuality, of recorded moments in time, but neither do we see the symbolic abstraction of a painter recreating through style and technique the image of a moment in time. To open with Bruegel is an odd choice. Even if one is wholly unfamiliar with the artist or their work, they can see and appreciate the depth and complexity of one the greatest painters of all time. The remainder of 24 Frames, by comparison, is only of interest because of the auteur that proceeds the viewing. If we didn’t know who was manipulating these images, would anyone care? Or more interesting to me: if this was Gus Van Sant’s 24 Frames or Alejandro Iñárritu’s 24 Frames would we feel more comfortable calling it out for being hideous, boring peplum.

24 Frames is closer to surveillance footage in a databank and the production of videogame imagery. The film has the eerie and grotesque quality similar to that of Cabela’s Big Hunter circa the late 90s. Sprites rendered from recorded (actualities!) animals are violently coded into computer generated frames of a natural environment. They move like that old Simpson’s Movie Maker program, choppy and poorly rendered. Of course, the interactive nature of gaming complicates this comparison, but one could stand still and absorb the rendered environment of Cabela’s Big Game Hunter (as I used to do when I played). The actuality of time passing is violently destroyed by this composite. We do not see scenes or animals acting in nature, but something less. It is the uncanny. The comparison to Lumiere is a strange one, beyond the facile recognition that any recorded image exists in time. The magic of the actuality is in the unpredictability of action and the semi-permanent documentation onto celluloid of a moment in time that is transposed through technological mediation into a framed composition of time and the facsimile of space. Kiarostami flattens this and creates compositions of flat artifice—of violently manipulated digital corpses. Any sense of beauty or magic is projected onto them.