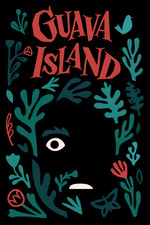 I mean, pairing Donald Glover and Rihanna is one thing, and that's a surefire way to make me want this movie, but having a runtime of 55 minutes is truly the icing on top of this great cake.

Guava Island is a highly entertaining tale of love, music, and greed. The animated introduction, narrated by Rihanna - with better narration than Home (2015)! - was so cute, evoked the feel of a fairy tale, and really reminded me of iconic storybooks during my childhood. The main story continued to dazzle me with its lived in and grainy feel, with hypnotic cinematography by Christian Sprenger.

The movie knows what it wants and lets Donald shine whenever he sings and performs his well-known songs. I've known him since 30 Rock and Community, but I'm not really well-versed with his discography. Some musical numbers feel like clips put into the movie, and though that doesn't really distract from the whole story, there were times were I wanted to see more of the story.

Still, it's lovely to spend an afternoon in Guava Island with Donald, Rihanna (who is actually a good actress with the right direction - see Ocean's 8, this movie), and Letitia Wright in a slightly smaller role but it's fun to watch her have fun. In fact, I think everyone had a good time making this movie and that's enough for me.