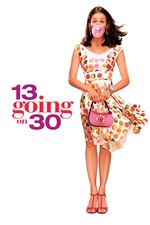 13 Going on 30 is a wholesome romantic comedy that brings so much innocence to love. The bright-eyed lead character is adorably lost in the world of adults which results in a nostalgic trip to the 80s with a modern mix. This radiates a warmth that makes it so comforting to watch.

Not being a kid in the 80s, but quite familiar with the era, I felt some sort of nostalgic trip here. But this movie doesn't rely on that because its wholesome nature pushes through as such a heartfelt story. What it lacks in the typical raunchy attitude of mist romantic comedies it replaces with the bright wonder of a child. It comes off as sweet rather than trite which it could have easily become.

Jennifer Garner's list puppy act in this is so adorable. She remains in character as a child in an adult's body and never falters. Along with Mark Ruffalo's always sweet character in movies like this it just can't go wrong.

There isn't anything too flashy here given its premise, but the portrayal of innocence here warms the heart. It feels so familiar and certainly doesn't break much new ground, but this feels fresh because of the care that it exudes.