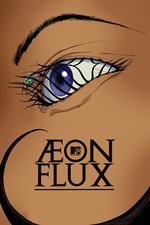 "oh you mean that 2000s movie" no i don't mean that 2000s movie. it's hard to compare the MTV animated series to anything else i've seen, and i think that's what creatordirectorwriter Peter Chung intended. Æon Flux is a constant experiment in storytelling, character exploration, animation, sound, the dvd itself probably does kickflips inside my PS4 just to see if it can. it's pretty funny listening to the commentary showing that the challenge to interpret an episode often extends to its own creators.

you can separate the series into two formats: the original shorts aired on MTV's Liquid Television (a variety program of experimental low-budget animations, worth its own watch), and the later half-hour block episodes. The shorts are rough, fast-paced and visually driven with very little dialogue while the full episodes are dense, playing out closer to an opera and putting more focus on the characters and structure of the story - though both formats remain always non-linear. While it almost sounds like two different shows, they actually fit surprisingly well together and my favourite way of watching them is on VHS, where the shorts are nicely sandwiched between longer episodes. The DVD boxset is great and you should buy it, but the shorts are only on the third disc and presented like special features, when I think they are equally valuable as part of the Æon Flux universe and as pieces of art in general. But if that's my biggest nitpick, then it's still pretty good.

wow it turned into an unironic review. watch Æon Flux or you're gay