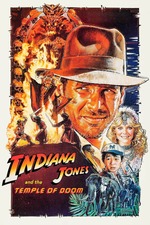 “What a vivid imagination.”

Whereas Raiders is balanced to perfection, Temple of Doom pushes everything that worked up to maximum: it’s more playful, it’s sillier, but also it’s more gruesome, it’s more overtly an action movie, and so on. But it moves like the clappers and is almost relentlessly entertaining, so what’s there to complain about?

(As a side note, this is technically my first time seeing the film in full. If you don't know, on its original release in the UK it was cut by over a minute to secure a PG from the BBFC. That version persisted even until the DVD release, with the uncut version only debuting on Blu-ray (which I watched tonight for the first time). So, that’s nice.)