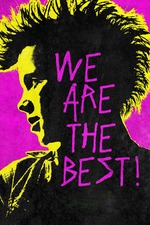 The scandals aren’t fewer in their public appearances either. I will never forget Guldbaggegalan 1999 (sort of like The Oscars of Sweden, but boring). Moodysson had just debuted with his smash hit Fucking Åmål (a.k.a. Show Me Love) and decided to spice up his acceptance speech by wearing a teddy ear headband (which you can watch here on YouTube) and flipping off the audience. Thereby making the award show view-worthy for the first time in decades.

His rebellious vein has also manifested itself in this latest opus Vi är bäst!. Set in Stockholm in 1982, it concerns Bobo, Klara and Hedvig, three 12 and 13-year-old girls who love music, hate sports and question everything without second thought. Any adults or bullies who want to have their way swiftly discover how futile it is to try and break their independent little spirits.

All three of them are outsiders; Bobo being a self-chosen tomboy, Klara a spiky-haired bolt of energy and Hedvig, who becomes part of the friendship trio later on in the film, a timid girl from a very Christian home.

Daily vexed by things that rub them the wrong way, the girls channel their anger through lyrics and music; spontaneously forming a punk band, much helped by Hedvig’s gifts for fine-tuned guitar play. Precocious as they may yet be when talking faith and politics, they’re still as susceptible to the charms of boys as any other girl in their hormonal age. Which gets more complicated as Bobo and Klara have a crush on the same boy, who plays in another amateur punk band.

Lukas Moodysson has also written the screenplay for the film, which is adapted from the semi-biographical graphic novel “Never Goodnight” by his wife Coco Moodysson. Nostalgic and character-driven, the story pleasantly expels stereotypes while tending to minute details in the physical look and feel of the era. I wasn’t born yet in 1982 (my existence didn’t kick off until two years later) but I know enough of the time to say that it has been perfectly resurrected. He did it with Tillsammans and now again with a film set seven years later. Fantastic atmosphere on both accounts and difficult to depart from. It’s like a warm blanket you’re dying to hold on to, as much as the girls cling to their specific music taste when their mainstream equivalents insist that “punk is dead”.

Apart from how insanely talented and natural the female trio is in their dynamic turns, the greatest reason to why I loved the film is because of how outrageously funny it is. Such as the girls’ debates about God, which is not unlike a teenage spin on a Bergman film, but with considerable more levity. “I don’t believe in God. I believe in ketchup”, as Klara declares. Also hilariously explaining to the religious Hedvig (as if not to offend her) how a punk song called “Hang God” is clearly Christian since the title recognizes that there is a God to be hanged. Because, you know, logic.

Awkward parents, social exclusion – it’s like Paul Feig’s underrated Freaks and Geeks but with female leads and bucket loads of attitude. A life-affirmingly wonderful coming-of-age jewel, which puts Moodysson right back on top as the best, actively working director in Sweden right now.

Punk isn’t dead. Only my doubts that said film-maker could ever return to form again.