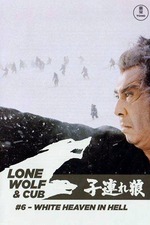 Whooooo boy. Glad this is the last movie in the series because where would you go after this one? Zombies!! Zombies who can move through the earth like worms? (Yo, I thought this was the spider clan?) Massive final battle in the snow!!!!

I am disappointed that Itto's quest to take down Lord Retsudo (who seemingly has infinite numbers of children at some point? and a rocket launcher that reloads itself) and the Yagyu clan wasn't concluded in this series. But, hey, we can't have everything.

Wakayama as producer and star really had a lot of hands-on input in this movie, and got to do what he wanted, but really could have used someone to keep him in check. I mean, the snow fight was awesome but maybe too long and also felt like they had just subbed in snow for sand from the second movie (and also the numbers of the one-vs-many fight from the fourth movie).

And with that, I've caught up with Lone Wolf and Cub! Happy New Year!

(Really could have done without the 5 minute scene of the one illegitimate Yagyu son showing up at his illegitimate sister's place, dragging her out of the bath, and raping her/committing incest, forcing their father to kill them to hide the shame. Like, the sister character was introduced in one scene, and then dies in the next. Ick. Ick ick ick.)

ETA: pretty sure I heard some samples from Mussorgsky’s Night on Bare Mountain at times in the score