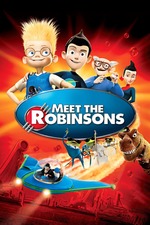 Looking through the reviews for this movie on Letterboxd has me feeling crazy... does nobody else see how blatantly terrible this movie is? I'll grant that it has ambition to spare with regards to the time travel plotting, and I appreciate the attempt at capturing a bright and optimistic retro-future vibe (emphasis on attempt), but every single aspect of this movie falls apart in execution.

The story is so overstuffed with ideas and characters that it breaks down into incoherent ADHD-fueled nonsense, the character designs are hideous and accompanied by shockingly bad voice acting, the soundtrack choices are unbearable, and the humor is probably the worst of any Disney Animation Studios film, and I'm including the likes of Home on the Range and Chicken Little in that evaluation.

Is it a nostalgia thing going on here? I was already a teenager when this came out and missed it in theaters, but I can firmly say that if I were a kid I wouldn't want to have a playdate with any fans of this movie. In fact, this movie is the cinematic equivalent of that annoying child who would shotgun Pixy Stix powder and endlessly babble on about all his crazy incoherent ideas. Oh shit, wait. I was that kid.