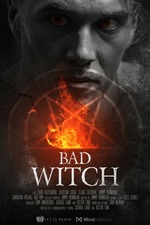 Xander (Chris Kozlowski in only his second role) is a witch whose use of black magic has never led to anything positive. He’s trying to go cold turkey on witchcraft, but when he helps a young man named Roland Grimm (Jackson Trent) needs his help with the pains of growing up, he decides to start working his magic again.

Directed by Victor Fink (his first directorial effort; he was also the film’s co-director) and Joshua Land (I Like Me, which also featured Kozlowski), the film starts with our hero — when he was just a little boy — finding the ritually murdered body of his father. The book of spells that he finds leads him to a life of using magic to get whatever he wants and the bad karma that comes with it.

Will helping a teen in need help him change his path? This movie switches from comedy to darkness while featuring some unexpected story beats and decent effects.