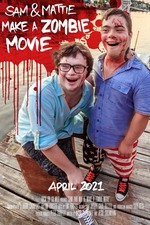 Since they met at the Special Olympics, Sam Suchmann and Mattie Zufelt have been best friends. Mich like the readers of this site, they’re obsessed with movies and decided that it was time to make their own, filled with sex, violence and gore. And they totally succeeded.

This is it pretty much the feel-good movie of all time.

Sam and Mattie went on to storyboard, script, produce, cast and star in their dream project, which they called Spring Break Zombie Massacre.

This is the story of how it all happened.

Produced and directed by Sam’s brother Jesse and Robert Carnevale, this movie intersperses the narrative of the film the guys made with the real stories that inspired it and moments of them actually making it.

Perhaps the best part of the film is the fact that Sam and Mattie may not have made a movie that was a financial success, it was exactly what they wanted to do.

This is a story filled with people smashing the expectation of disability, of communities being formed to help them and the joy of making a movie where Satan continually pisses all over people. It’s also one of the happiest movies I’ve watched in some time, so if you need a pick-me-up, I recommend it with no reservations.