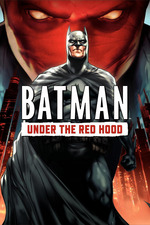 Review from my VOD column "This Week on Demand".

DTV animation or no, any Batman film released at the height of Nolan’s Dark Knight Trilogy’s popularity demands its own unique draw to make valid its contemporaneous existence; for Brandon Vietti’s Batman: Under the Red Hood, that draw is the Batman-Robin dynamic. Focusing on an aspect of the iconic character absent from Nolan’s interpretation, Vietti and writer Judd Winick deliver a story steeped in stark emotion, boldly beginning the film with the Joker’s brutal murder of Robin and thereby examining Batman as a hero defined by his greatest failing. A brooding Bruce Greenwood as the caped crusader heads a stellar voice cast including a chilling John DiMaggio Joker and Neil Patrick Harris’ delightfully comic Nightwing (the original bearer of the “Robin” appellation). Bringing something new to that most famous of fictional relationships, Batman: Under the Red Hood not only establishes itself as a worthy alternative to Nolan’s version of the character, it even threatens to exceed it.