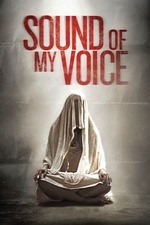 Comparable to Safety Not Guaranteed in its shared focus on people drawn in during the course of an investigation to seemingly crackpot ideas, Sound of My Voice is more accomplished in the achievement of its aims, though by no means wholly so. Brit Marling is the best of a darn fine cast, bestowing her enigmatic cult leader with the right mixture of mystique and humanity to make her compelling and relatable. Well executed, it's an intriguing, beguiling film with universal ideas at its core: like its cult characters, it might raise more questions than it answers, but it raises them in a consistently fascinating manner.