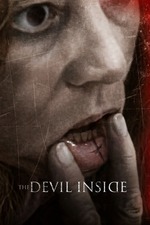 It's a horror with no scares nor any efforts that I could see at supplying them; an exorcism film without any sense of religious thematic exploration to support its scenes of demonic ritual; a found-footage movie without the requisite directorial competence to cover up blatant cinematic staging; an ensemble piece without actors capable of serving these characters, themselves not capable of serving the plot, itself not capable of serving the poor schmucks who—in search of nothing more than some fearful entertainment—paid good money to be fed this thoughtless, thankless drivel: it's The Devil Inside, it's one of the worst films of 2012, and it's an insult to horror cinema as much as it is to most anyone with eyes.