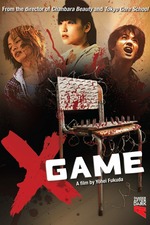 Review from my VOD column "This Week on Demand".

Conceptually a cross between Confessions and Battle Royale, Yôhei Fukuda’s X Game (alternately known as Death Tube) sees a group of Japanese students captured, imprisoned, and forced to torture one another as vengeance for a series of brutal bullying games they played upon her as children. Interestingly incorporating aspects of modern media in its opening act, it’s a film that appears attuned to the tenets of the world around, its icy representation of internet voyeurism and snuff film offering additional underlying weight to its violent plot. Alas, all soon turns stale as Fukuda lapses into sensational, vacuous portrayals of the very violence he earlier seemed to condemn, depicting in moderately graphic detail the horrors inflicted upon the students by each other. When at last its overlong 2 hour runtime comes to a close, X Game has long since abandoned all potential in favour of cheap gory thrills, none of which, of course, ever manage to be terribly thrilling at all.