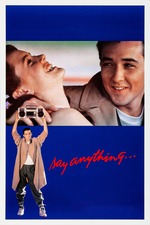 "I would like, if I may, to take you on a strange journey"--oops, wrong film, but I am going to get into anecdotal territory here, just in case that's not your thing.

In 2007, when I was a senior in high school, I moved to a different school, in a different state with only one year to make friends and "figure out the rest of my life" with only two family members in the state. It was rough; I was ecstatic to have the opportunity, and I make friends fast, but I was apprehensive nonetheless. When I walked into my creative writing class I saw in bold letters above the door "I gave her my heart, she gave me a pen." I didn't have to wonder for long what that was a reference to, as we began a class-wide creative writing blog full of quotes embedded all throughout the site, with a promise that we would watch the inspiration for these words when the blog assignment was complete. As I worked through my assigned short stories and began writing poetry again for the first time in years, I was simultaneously experiencing one of the greatest influences of my life. Despite the fact that I had kept a journal of short stories and poems since I could hold a pen, I had never had anyone read what I had written before. My creative writing teacher pushed me to write more and pushed me like no one else because he saw a capability in me that I hadn't known. I was making friends, having fun, and writing like I never had before. I will undoubtedly never forget the day I walked into class with the lights dimmed ready to watch the secret inspiration for our creative writing blog. Unknowingly to all of us, the quotes sprinkled all through the room and even our teacher's pen name "Lloyd Dobler" were pulled from Cameron Crowe's 1989 directorial debut, Say Anything... In the film, John Cusack plays a high school underachiever who's after the heart of the class valedictorian played by Ione Skye. Discovering life and love at the end of his senior year, Lloyd learned that there is no handbook for life. The story hit close to home as I was also a senior trying to "figure it all out", deciding where to next take my life, and falling in love for the first time. The positive memories of my whirlwind senior year in high school have been inextricably linked to the film Say Anything... and I am so thankful for one of the most influential people in my life for introducing me to this film.

Just before graduation, Lloyd Dobler (John Cusack) is convinced that he had a date with the valedictorian with a brain "trapped in the body of a game-show hostess" because they shared a table together while eating at the mall one day. After bantering back and forth with his best friends Cory (Lili Taylor) and D.C. (Amy Brooks) about the un-attainability of Diane Court's (Ione Skye) social position in relation to Lloyd's, he decides to go for it and call her. Perhaps no one is more surprised than Lloyd when Diane Court not only calls him back but agrees to go on a date with him. Diane accompanies Lloyd to an annual graduation party held at the home of a former student of the high school. Diane, who has largely been hidden away from her classmates studying and enjoying none of the social aspects of high school. Her classmates are glad to finally meet and get to know Diane in an informal setting, and Diane is pleased to finally feel as though she has friends in her life other than her hands-on father, James Court (John Mahoney). After much deliberation and internal conflict after being accepted to a fellowship program in England, Diane decides to keep seeing Lloyd, on a strictly platonic basis. Lloyd takes this understanding because to him, any time with Diane Court is better than time apart from Diane Court. Lloyd decides to make his summer ambition to spend as much time with Diane as possible before she leaves. Disappointed that his daughter has settled on a lesser-than-she "distraction", James quickly begins to care less about how Diane chooses to spend her time, as his own problems arise. Ultimately a decision must be made between the life Diane has always imagined, or has been imagined for her, and the one that is unfolding.

"I don't want to sell anything, buy anything, or process anything as a career. I don't want to sell anything bought or processed, or buy anything sold or processed, or process anything sold, bought, or processed, or repair anything sold, bought, or processed. You know, as a career, I don't want to do that."
Lloyd may not know what he wants to do, but he knows what he doesn't want to do, and that may be more important. Lloyd Dobler is my favorite character, perhaps in cinema history. He's got a lot going for him, Lloyd is protective of his friends, he's introspective, independent, undaunted by going against social norms, he's willing and able to teach, as well as learn, and he's adaptable. Lloyd is also fully equipped with a myriad of characteristics that can't be taught. Lloyd is existential, and is constantly thinking about the world, Lloyd listens to people; he actually listens to people with the intent to hear what they are saying and respond/react to it. Lloyd is a person that genuinely wants those around him to be happy. He cares so deeply for his friends that he only wants the best for him. Maybe the best of Lloyd's innumerable endearing qualities is that he knows how to comfort people on an individual level. Who doesn't long for someone in their life that knows them so well, they know exactly how to make them feel better when they are down. That's Lloyd Dobler, and we should all be so fortunate to have someone like that in our lives. Maybe I just like this film so much because it came at the exact right moment that I needed it, or because I associate it with the best year of my life; either way, I am thankful for Say Anything... and of course, kickboxing, it really was the sport of the future.