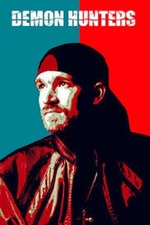 An ancient demon, Duamerthrax the Indestructible, is attacking a university. The Demon Hunters come to the rescue, but will the team succeed?

Demon Hunters came about when a group of friends attending Pacific Lutheran University decided to get together and make a movie. This is an extremely low-budget home-made shot-on-video amateur production, but it has a lot of heart. The script, written by Matt Vancil, is pretty well written and contains a lot of humor. There are a lot of references to other films. Vancil himself plays the demon, Duamerthrax, in an over-the-top comedic way and he really shines. He actually has an almost 4 minute long uninterrupted shot that brought a huge smile to my face.

When viewing this film, keep in mind that this is not a Hollywood production. It is a homemade first-time film made by a bunch of college kids, who were probably not studying film. Keep your expectations appropriately set. The folks behind this film would go on to form Dead Gentlemen Productions, and they continue creating much-more-polished, fun content to this day.