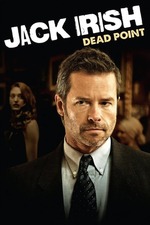 Guy Pearce continues to be a fantastic piece of casting as Melbourne former lawyer/private eye/whatever the hell he is in this third TV movie outing for Peter Temple's creation. It's an enjoyable enough series that seems to have had its budget increased significantly for this third film but without Pearce in that role I can't see how the show would have succeeded in being anything more than run of the mill cheap Australian television that relies heavily on thug culture to sell itself.

In the Melbourne of this show almost everybody is white and every woman is blonde but at least they got the fact that it's always grey and miserable looking factually accurate.

There are some light hearted moments, an explosion and a particularly shocking (unexpected more than gory) shooting but mostly the plot is noticeable for being as unintelligible as some of the dialogue and as weak as the acting of Vince Colosimo. And yet I still enjoyed myself and look forward to the next two being made. Strange.