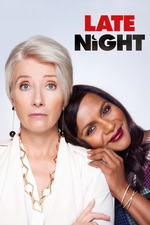 Emma Thompson and Nisha Ganatra star along with Hugh Dancy in "Late Night," an Amazon film from 2019.

Thompson plays the British host of an American late night show, a job she has had for 20-plus years. Lately - like in the last ten - the ratings have been slipping.

Now in her fifties, Katharine Newberry is discovering that her acerbic wit and patricianism are no longer current. She doesn't really know anyone on her writing staff, some of which have been with the show for 27 years; none of them are allowed on the set; they're all men; the show has no social media presence. A shakeup is needed.

Newberry insists a woman be hired, and a young woman from a chemical lab, Molly Patel (Kaling) who wants to be a writer is brought into the hostile situation where she is not taken seriously. But her fresh approach and lack of boundaries impresses Newberry.

I actually thought this film would be better. It's good, a kind of feel-good film, with Mindy Kaling absolutely delightful as Molly, who hard-working, earnest, honest, talented, and has to develop a thick skin.

The role of Katherine was written for Emma Thompson; yet I'm not sure she was totally right for the role, at least the way she played it. She's a wonderful actress and gave us a highly-developed characterization, and it's not that she can't DO comedy, she can.

However, she doesn't quite come off as a comedienne. I can't explain it any better than that. I could almost see a real out-there actress like Helena Bonham Carter or a real-life comedienne like Miranda Hart pulling it off better.

Enjoyable; I liked it better than Devil Wears Prada, which was so over-hyped that you thought you were seeing Citizen Kane.