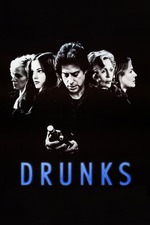 Half of this movie is set in an AA meeting, so it’s a series of monologues in one room; besides stagey, it also feels schematic, with the labored variety of The Breakfast Club. The other half is Richard Lewis’ character on a downward spiral, hijacking his own sobriety. It’s tragic but also tiring to watch step by self-destructive step.

If you’re defining it in terms of naturalism, then Diane Weist and Spaulding Gray deliver the best, most nuanced performances. Then there’s Ms. Dunaway, one of our most brilliant stars who wouldn’t know naturalism if it bit her in the ass. Her dramatic pauses, her effete hand gestures — she’s either giving the worst performance in the picture, or she’s pointing towards a more interesting road not taken. What would it have looked like if Sirk or Minnelli had directed a movie about a dozen alcoholics sitting in a room, spilling their guts? A breathless, heightened version could have had more emotional resonance than the one-note grit that we get here. Without a distinctive visual sensibility, realism can be a dead end.