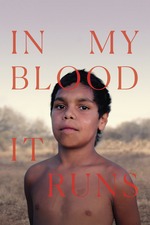 In My Blood It Runs

In My Blood it Runs is a marvellous documentary, one that manages to be human and charming yet also honest and deeply uncomfortable (in a good way!). Every country built upon colonialism is going to be a racist one, but Australia at times feels like the H.P. Lovecraft of racist countries. So racist that even other racists turn to it and say “mate, you’re being racist”. This documentary highlights Australia’s extreme racism against its indigenous population through the eyes of Dujuan, a troubled young boy growing up in Alice Springs. The film centres on both Dujuan’s trouble at school and the cultural alienation between his white focused “official” education and the Arrernte education by his aboriginal peers and elders.
The documentary works as an engrossing and human tale, but it also draws connection between the Northern Territories’ juvenile detention facilities and the “lost generation” child separation policies, to bring into light just violent and terrible Australia’s past is. The film pulls no punches.
As a white viewer, there were more than a couple scenes that elicited uncomfortable laughter from my (mostly white) audience. This is good, as colonial settlers we deserve to be made uncomfortable by our country’s and our own racist pasts. At point, Dujuan remarks that he’ll “use the white people’s tools to kick them off Aboriginal land” and I feel this film is an extension of that.
A wonderfully crafted documentary that manages to be both personal and socially conscious, In My Blood it Runs is one of the year’s best.