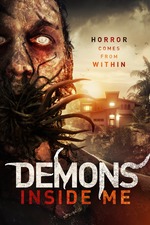 There seems to be a lot a French Canadian filmmakers doing english horror movies these days. And they are all the same : french actors speaking english with heavy accent instead of just speaking french between each others, movies that take place in the woods or in a cottage house by the lake, terrible FX, pathetic storyline.
I was expecting the worst from this being Alexandre Carrière's first movie with local legend Roc Lafortune (the go-to-guy vilains in english movies filmed in Quebec) as the semi-lead.
Far from being good, this movie score some points by having good special effects, an above average performance by the lead actress and some artys-fartsy touches here and there.
The cinematography is alright, in the sense that Carrière knows what he's doing. The big letdown is those artsy fartsy ideas. There fine for that kind of movie but they feel like the movie didn't turn out the way it was supposed to (the fault to whoever) and that's the best they could do to compromise. All in all it is okay. The drawback is the stupid fucking story of "playboys" doing la vida loca. They don't look like playboys, don't talk like playboys and they stay in a cottage like douchebags would instead of a villa on the side of the beach like real playboys would.

Anyway i'm wasting enough time writing this about a movie that doesn't deserved it. I was caught off guard so I didn't completely hated it.