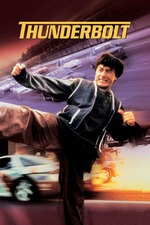 Pretty middle of the road as far as Jackie flicks go. Probably some of the worst editing I’ve seen in any of his Hong Kong output along with some really weird faux slow motion thrown in that muddies up the fights.

Despite all that it still has a great fight where Jackie takes on a bunch of Yakuza at a pachinko parlor, which made the whole movie worth a watch. Also some of the early car chases are genuinely well done and really felt like a motorized version of Jackie’s hand to hand fights,