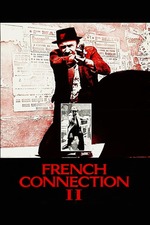 The French Connection II is another example of fantastic gritty 70’s filmmaking. John Frankenheimer took what could’ve easily been a quick cash grab of one of the best police dramas ever made, and instead created a solid sequel that manages to stand shoulder to shoulder with the original. The film sees the return of New York detective “Popeye” Jimmy Doyle (Gene Hackman) as he tracks down Alain Charnier, the drug smuggler who managed to slip away at the end of the previous film to Marseille.

Whilst the film certainly has a more melodramatic edge than its predecessor it still manages to stay relatively grounded in the style the first film set-up. John Frankenheimer retains all of the same visual rough edges whilst using grimy, derelict locations that add another layer of atmosphere to the criminal world that Friedkin used to perfection. The film’s script is also surprisingly effective for its time. Usually a sequel is more action oriented, here though it’s the complete opposite as the film examines Doyle’s character first and foremost.

Gene Hackman once again delivers a wonderful performance as the the hotheaded “Popeye”, and with this film he’s able to expand on the wonderful characterisation of the first film. He gets to really sink his teeth into the role as he breaks Doyle down not just mentally but physically before rebuilding him.

The only downside is that this film wasn’t able to capture the sheer visceral raw energy of its predecessor, which in defence of the sequel it was near impossible to capture that zeitgeist again. However, what it lacks in that department it makes up for with its deep characterisation of its lead character. In the end this film was a pleasant surprise I thought it would be a typical generic sequel beforehand, instead it turned out to be a film that holds up on its own. French Connection II is an excellent continuation of the story, and it’s a shame that this film is still under-appreciated as it has a lot to offer.