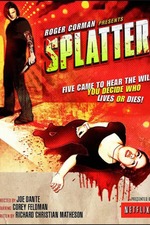 I have a soft spot for Joe Dante, but I'd like to know what he was thinking with this....film? If it can be called that. It only runs thirty minutes, so I guess it's technically a short film (thank god). Anyway, I'd expect dreck like this from a student filmmaker not an accomplished genre director.

It goes without saying the story is utter crap. A rockstar (Corey Feldman) shoots himself at the start and begins to torture/kill five associates (that apparently wronged him) at his wake from beyond the grave. The film tries to infuse comedy with horror in typical Dante fashion, but it never works.

The short is poorly lit and poorly directed, some of the camera angles are nauseatingly bizarre. There are a thousand obnoxious close ups, and half of the film is tilted. The actors look bored out of their brains, and how they got Tony Todd to turn up I don't know?

This is currently airing on Netflix in the UK and it's god awful, watch at your own peril!

Revolt of the Zombies