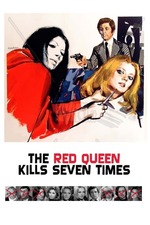 "The Red Queen Kills Seven Times" has more moving pieces than a kaleidoscope. At any point you feel as though you've got a handle on the film, director Emilio Miraglia completely pulls the rug from under your feet.

"The Red Queen Kills Seven Times" tells the story of two sisters destined to destroy each other due to a family curse. Every hundred years, the Wildenbruck family has two sisters, one that dies at the hand of the other, only to return as the legendary "Red Lady" who'll kill six innocent victims followed by sister who murdered her.

Like many Giallo's this film revels in its attempt to keep the viewer guessing as to who's the killer. However, whilst this is a traditional Giallo in its script. The film carries a unique Gothic aesthetic that's also mixed with high class Italian fashion culture. Visually this is one of the most interesting Giallo's I've seen so far. On the one hand you have the style and grace of Fellini and on the other the pulpy, neon grunginess of argento.

The story whilst absolutely confusion at best and nonsensical at worst manages to come together in the end to deliver a satisfying conclusion that makes this film work. However, I will say that it's best to not even bother trying to figure out what's going on, just go with it.