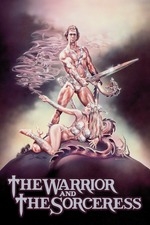 The Warrior and the Sorceress

"The Warrior and the Sorceress" is one of the cheesiest, trashiest pieces of junk I've seen in a long while, and I kinda enjoyed it. This film is straight garbage, it's essentially "Yojimbo" but set against the backdrop of Swords and Sorcery with a slight infusion of Sci-Fi.

David Carradine sleep walks through this film as a drifter that plays both sides of warring factions. The film is essential shot in one main location and looks as though it was shot on a budget of £5 and half a Mars bar. The 4:3 ratio is ugly and the dubbing is rubbish. The script literally steals "Yojimbo" yet somehow fucks it up. The dialogue is, shall we say......laughable at best. The acting is what you'd expect and the main female "Sorceress" who does ZERO sorcery is literally topless in every single frame she's in. She literally goes through this whole film topless. The film plays out every single infantile cliche you could imagine with this genre, yet, it was oddly charming?

This is the kind of film you laugh at, yet by the end you laugh with it. There are so many goofy moments from a warlord that has a weird dinosaur/alligator as an advisor to a weird tentacle prison monster guard.

This film is utterly, utterly ridiculous. It's production is rubbish in every conceivable way. However, I had a moderately fun time with it. It's not as good as the rubbish "Deathstalker" but it does have its moments. Also the poster really flatters David Carradine as he looks nowhere near in the same physique, lmao!